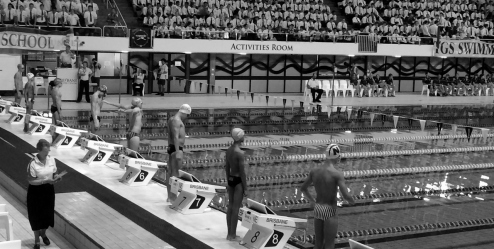 “Tales of impossible personal bests at these championships are almost mythical, growing each year as they’re passed down through the generations by teachers who’ve seen it all, coaches who once swam here, or former competitors who slink in to sit quietly in the stands, children and/or grandchildren on knees, reminiscing.”

In the glossy program for this afternoon’s GPS Swimming Championships, the record for each of the forty-two events is printed prominently above the starting list.  Headlining the first event, the all age four hundred metre freestyle, it reads:

Despite having done pretty much everything that swimming can ask a man to do, Kieren Perkins, the former world-record holding and twice over Olympic gold medal-adorned Superfish, is rumoured to have singled-out this annual competition as the most atmospheric and parochial of his extraordinary career.

We find ourselves caught in a crush of teenage students, shirts half-tucked, ties awkwardly too short or else too long, earphones dangling from ears into bags or pockets. There’s hundreds of them on the move, each in theory with a destination in mind but in all likelihood merely tracing the steps of the kid in front.  They’re cascading into the Brisbane Aquatic Centre (more colloquially known as ‘Chandler’, the indoor Olympic pool built back in ’82 for the Commonwealth Games). The mail from a nearby teacher, with an unashamed dollop of bias, is that today’s championships are bound to be a two-horse race between Nudgee College and The Southport School. History too says it’s a safe bet; no other school has won the event for 23 years.

Chandler today is a sort of giant humidifier in which the energy of a couple of thousand mostly-teenage humans has churned the hazy waft of chlorine into something both thick and palpable and undoubtedly exhilarating.  Concrete tiers lined with metallic bench-seats rise up from the pool deck perhaps twenty-five rows or more, their ascent halted where the back rows meet the ceiling.  Masses of students are arranged in three-to-four hundred seat sections, the effect being giant sheets of uniformed humanity, clearly delineated in variations of blue, green, red, yellow, white and black, striped horizontally, vertically and diagonally. Ties are universal. These students fill the seats closest to the pool, swimmers and families the ones higher up.  Not surprisingly, the schools with the largest boarding houses are the best represented, and most organised.

Synchrony and enthusiasm are tested with opening war cries; across the pool the chants strike like rocks on corrugated iron, ricocheting and returning from innumerable directions, firing off the lines and angles of the building. Soon enough it’s all thundering white noise; the acoustics here are kind to amplification but not clarity.  But that’s of scant relevance; in establishing the ascendancy of support, it’s obvious that volume is valued above all else.  Amid all the commotion, the pool water remains impossibly still, glistening under lights.  It looks fast in that indefinable way of all great pools in the titillating moments before a championship.

On the western side of the pool deck, there’s a brightly lit catacomb that opens up and leads somewhere under the stand.  Right now, nine thirteen-year-old boys are waiting there, fidgeting nervously.  It’s hard to know precisely what they’re feeling, but peering out of that hallway – the concrete above them quaking under the combined stamping and screaming of close to one thousand students – they’d have a curious snapshot of the other thousand or so boys in the opposing stand, most bound together arm-in-arm, bowing, swaying, jumping, dancing to music between races, some yielding painted, oversized megaphones, others waving flags and a select few dressed as mascots: a tiger, a bear, a shark and a Spartan, to but survey.  It’s controlled chaos out there, all co-ordinated to achieve a very specific effect.  It’s fair to assume these nine prepubescents are feeling some of that effect.

Exiting the relative shelter of the marshalling area to take up their positions behind the starting blocks, the entire arena opens up before them, in all its utter madness, its utter ecstasy, and just plain utterness.  In comparison to the near-to-fully-grown muscle-bound swimmers who’ve just finished the all age individual medley race, these kids, indoctrinated into this order of heavily traditioned private schools only a few weeks ago, are mostly sinewy, five-foot-nothing whippets; boys among near-enough-to-men.  The whole scene must be grossly magnified for them. Overwhelming, to say the least.  At the sound of a whistle, silence washes over the crowd, and the competitors step up, almost climb, onto their blocks.  Leaning down to take their marks, the hush deepens.  I can’t see it from where I sit, but I’m quite sure their legs must be shaking, seized by fear and adrenalin.  At the gun, the spectators burst into voice as the boys hit the water for their first time at GPS; the thirteen and under fifty metre freestyle is underway.

In the cold, lonely light of an underslept, poolside weekday morning, it might be hard to nail down exactly what would drive schoolboys to follow that sub-aquatic black line, to train lap after waterlogged, lung-busting, lactic-acid-inducing, sometimes nauseating lap, three or five or ten times a week, week in and out. What could possibly inspire a teenager to crawl out of bed at dawn over the summer holidays and every morning of the first few weeks of the schooling year just to punish one’s saturated self in preparation for a single performance that on average lasts less than a minute? It might all be lost, in theory, to those of us long-ago out of the classroom. But as these thirteen-year olds have undoubtedly just been reassured, there is something about a few thousand concentrically facing peers ripping their throats to shreds in your name that any kid looking for his place in the world would understand in a microsecond. To be at the middle of all that, just for a moment, is probably worth just about any sacrifice.

The swimming here today is darn impressive.  Scholarships abound at these schools for boys with sporting ability and, in a region that’s arguably Australia’s if not the world’s breadbasket of swimming talent (cue honour roll of world champion and Olympic swimmers from Queensland), you’ll always find superlative underage swimmers in the water at GPS.  But it’s not the elite – among them a fourteen year-old from BBC who this afternoon wins three individual events and annihilates one record – that make this event what it is, rather the less talented but equally enthused boys who tirelessly turn up to every training session for that last solitary spot on the team.  Tales of impossible personal bests at these championships are almost mythical, growing each year as they’re passed down through the generations by teachers who’ve seen it all, coaches who once swam here, or former competitors who slink in to sit quietly in the stands, children and/or grandchildren on knees, reminiscing.

The square diving pool at the far, southern end of the arena is awash with splashing bodies, recalling an oceanic feeding frenzy.  The last ten events of the day – the medley and freestyle relays – are fast approaching and hundreds of competitors are warming up.  It’s often the relays, with swimmers emboldened by a common goal, shoulder-to-shoulder in the marshalling area, which provide the most compelling content for the viewer and induce many of those fabled personal-best and come-from-impossibly-far-behind performances. By the time the swimmers appear for the last event of the day, the open freestyle relay, with Churchie having broken the multi-generational Nudgee/Southport dominance and all but sown up its first title in 49 years on account of both sheer individual brilliance and consistent depth, it’s rather easy to see why Kieren Perkins said what he said.  The student hordes are exhausted, keeled over, hoarse, soaked through with sweat, but they haven’t been at more of a fever pitch all day.  They’re gripped by a kind of manic dehydrated delirium, carrying the anchor-leg swimmers home as if they’re walking on water.

Enjoy it? You can follow us by entering your email in the ‘follow us’ box at the end of the page or by clicking on the black ‘follow’ tab in the bottom right hand corner of your screen.  You’ll then receive our reports fresh from the grill to your inbox.  Stay hungry.